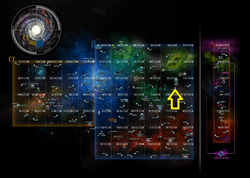 The Gasko System is a system located in the Gasko Sector of the Beta Quadrant.

In the late 22nd century the region around Gasko was hotly contested by the Klingon Empire and the Romulan Star Empire.

The Romulans built a space station there to solidify their claim, and maintained a small fleet at the site for the next half-century. After the Klingons allied with the Federation, the region's strategic importance waned and the Romulans abandoned the station. It was repopulated by a small group of refugees after the destruction of Romulus in 2387.