This article is about the playable starship. For the NPC vessel, see Federation Battlecruiser. 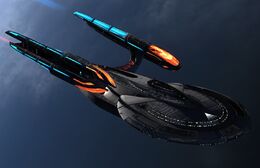 The Geneva-class Science Command Battlecruiser is a Tier 6 Battlecruiser which may be flown by Starfleet characters, including Federation-aligned Romulan Republic and Dominion characters. All faction restrictions of this starship can be removed by having a level 65 KDF character or by purchasing the Cross Faction Flying unlock from the Zen Store. This starship can be used from any level upon completion of the tutorial experience. As you level up, this ship gains additional hull, weapon slots, and console slots.

under the name Science Command Battlecruiser - Geneva Class. This ship can be purchased individually, or as part of the Command Starfleet Battlecruiser Bundle [T6] for 6,000

This Tier 6 starship is a science centric variant of the Command Battlecruiser. It features more science console slots and science bridge officer seats than the other Command Battlecruiser variants. They have been known to serve as hospital ships in emergency or deep space situations, especially during the Iconian War.

This ship comes equipped with the Tachyon Pulse Platform universal console, which is part of the Command Platforms Set. Other consoles from this set can be equipped for set bonuses and additional abilities.

By using an [Experimental Ship Upgrade Token], the Geneva-class Science Command Battlecruiser may be upgraded to T6-X, unlocking an extra ship device slot, universal console slot, and the ability to slot an extra starship trait.