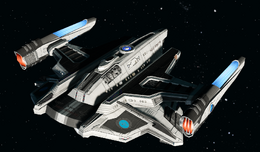 The Gladius-class Escort Refit is a Tier 2 (Level 10) Escort which may be flown by Starfleet characters, including Federation-aligned Romulan Republic and Dominion characters. All faction restrictions of this starship can be removed by having a level 65 KDF character or by purchasing the Cross Faction Flying unlock from the Zen Store.

Players can obtain this starship from any Ship and Shuttle Requisitions officer for 37,500

The Gladius-class Escort Refit comes equipped with an [Console - Universal - Impulse Capacitance Cell] that can create an Impulse Burst, greatly increasing the ship's speed and defense in combat for a short period of time. This console may be equipped in any console slot on any starship.