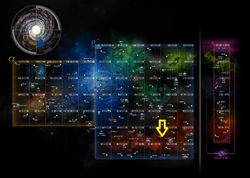 The Gorath System is a system located in the Gorath Sector of the Beta Quadrant.

It is the site of a PvP ground arena and was the location of a stronghold of the House of Torg until its dissolution in 2409. It belongs to Imperial Security as of 2411.

Gorath is a binary star system with a marginally-hospitable world. Although survival is possible on Gorath, it is made difficult by the preponderance of dangerous chemicals, such as sulfur and chlorine. Klingon Houses routinely use Gorath both for training and for battle over the exotic materials that sometimes form in the planet's harsh geosphere.