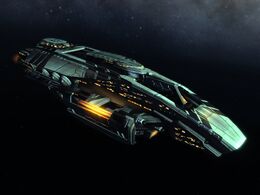 This article is about the playable starship. For the NPC vessel, see Draguas Support Vessel (Mob).

The Gorn Draguas-class Support Vessel is a Tier 4 (Level 30) Science Vessel which may be flown by Klingon Defense Force characters, including Klingon Empire-aligned Romulan Republic and Dominion characters. All faction restrictions of this starship can be removed by having a level 65 KDF character or by purchasing the Cross Faction Flying unlock from the Zen Store.

under the name Draguas Support Vessel. This ship was previously available on its own from the Zen Store; players that purchased it from there can still reclaim it from there on all their characters.

Gorn starship designers are pushing forward Klingon Defense Force technology with new ships designed to support a team or fleet in combat. The Draguas-class Support Vessel is one of these ships.