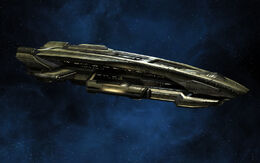 This article is about the playable starship. For the NPC vessel, see Varanus Fleet Support Vessel (Mob).

The Gorn Varanus-class Support Vessel is a Tier 5 (Level 40) Science Vessel which may be flown by Klingon Defense Force characters, including Klingon Empire-aligned Romulan Republic and Dominion characters. All faction restrictions of this starship can be removed by having a level 65 KDF character or by purchasing the Cross Faction Flying unlock from the Zen Store.

under the name Varanus Support Vessel.

A Gorn Hegemony design that has been converted for use by the Klingon Defense Force, the Varanus-class Support Vessel has the most advanced technology in the fleet.

By using an [Experimental Ship Upgrade Token], the Gorn Varanus-class Support Vessel may be upgraded to T5-X, unlocking an extra ship device slot, universal console slot, and the ability to slot an extra starship trait.