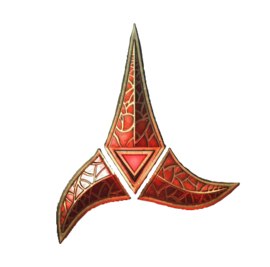 The Great Houses and their games dominate our Empire... Alliances of blood and blades, these organzations define the political state of Qo'noS. - Loresinger B'Alea.

The Great Houses are major political institutions in the Klingon Empire and consist of influential families, most of them of noble descent. Some of the Houses are descendants of Kahless.

A Great House is united by bloodline and led by a male Klingon. Upon death of the head of the House and his heir, the Mistress will take over control until a new male is found to take this position.

The Mistress, usually titled Lady, is the highest ranking woman in the House, either the mother or wife of the House leader. A House is named for its current leader but he also has the option of continuing the use of his father's name.

Feuds between Houses can last centuries but can be solved with the dissolution of one or both of the warring Houses.

The Klingon High Council consists of members representing the most influential Houses and is headed by a single Chancellor. The Chancellor doesn't have to be of noble descent or member of a Great House however he needs to be backed by at least one influential House.

On Qo'noS the political life is defined by alliance of Great Houses. The most powerful Houses even possess their own fleets. Thus, to govern the Empire the Council relies on the support of the families.

Great Houses in the High Council[]

Houses formerly in the High Council[]