Star Trek Online Wiki
Register
Don't have an account?
Sign In
Advertisement
in: Klingon NPCs, Non-player characters, Leader of the House of Grilkas,
and 4 more 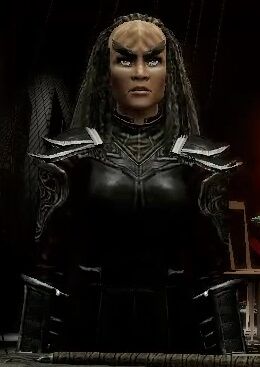 Lady Grilka is the head of the Klingon Great House of Grilka, mother of Koren and K'Dhan, as well as the wife of Worf.

In 2371, Kozak, Grilka's husband at that time and head of the House of Kozak, died due to an accident involving Quark in Quark's bar on Deep Space 9. In order to retain control over her possessions, she temporarily married Quark, eventually transfering her late husband's House into the "House of Grilka". Seeking financial advise, Grilka sought out Quark again in 2373. Worf quickly became infatuated with her, although the Great Lady stayed out of his reach, as his family was still stripped of its honor at that time.

During the Dominion War from 2374 to 2375, Grilka was involved with J'Nek, a warrior from her ship. She gave birth to their daughter Koren, but J'Nek would not survive the war.

In 2385, Grilka met Worf again, who returned to Qo'noS to become lead ambassador of the Federation. They soon started a relationship, and married the next year in a traditional Klingon ceremony with his family and many of his friends from Starfleet in attendance, including surprise guest Data.

In 2388, two years into her marriage with Worf, Grilka gave birth to K'Dhan. Being interviewed by Federation reporter Jake Sisko that same year, Worf remarked that "Grilka is glorious" and that "her shouts rang through the city as she birthed [my] son."