In Star Trek Online, ground combat is any form of activity involving a player's character. Whereas in space combat, the chief focus is a player's Starship or small craft. Star Trek Online is unique in the fact that players are offered both a first person shooter mode as well as a traditional RPG combat mode. In ground combat, a player typically transports down to the ground map with an away team of between one and four other members.

The user interface, or Heads Up Display (HUD), in ground combat is very similar to its space counterpart. A control bar located at the bottom of the screen may be used to activate abilities. There is a mini-map located at the top right of the screen; as well as the leave map (beam up) and scan for objective buttons. The status bar for the player and his/her away team is located at the right side of the screen in the form of a column. 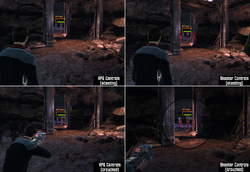 Comparison between Shooter and RPG modes.

Ground combat gameplay controls are divided into two modes, Shooter mode and RPG mode. Shooter mode was introduced in Season Four as part of a ground combat revamp. The feature was intended to offer players an alternative to the RPG combat style. Players may toggle between shooter and RPG modes by pressing the B key on the keyboard. Shooter mode is a first person shooter (FPS) styled setup, allowing players to control their weapon fire. Due to the FPS nature, players do not need a direct line of sight to attack targets. Additionally, players in shooter mode may switch targets much more quickly compared to someone in RPG mode. This is due to the fact that someone in Shooter mode may point and shoot, whereas a player in RPG mode must cycle the Tab key in order to switch to a specific target.

However, shooter mode is not without its disadvantages. The ability to hit targets in shooter mode relies entirely on a player's ability to aim their weapon. Shooter mode weapon fire will hit the first target on the path of the shot, whereas RPG mode players may bypass nearby targets to hit a more threatening target in the distance. Due to the nature of shooter mode, it is completely impossible to target an enemy directly behind an enemy already in your line of fire.

The "choose your away team"-screen

In ground combat, players have three types of abilities. While few abilities exist at low levels, the number of abilities a level 50 character may slot at one time is close to 20 when taking into account gear and unlockable abilities from the endgame reputation system.

Kit modules allow for players to enhance their captain through the use of specific Kit abilities, many of which vary significantly. As an example, a Science Officer's Medical Tricorder kit module will allow the Science officer to heal his or her team. Kits and kit modules offer a huge amount of flexibility to players of any class, as a simple ability change may completely change the overall skill set of the character.

Although many abilities are class specific, there are a select few abilities that may be used by all classes. The most common universal ability is Cardiopulmonary Resuscitation, which allows a player to revive a fallen ally. Consumables are another common universal ability. All player captains and bridge officers may slot up to four devices in their device slots. Large Hypos and the Shard of Possibilities are both commonly used devices in ground combat.

In ground combat, one of the most common defensive mechanics is damage resistance. By default, a player doesn't have any damage resistance to health or personal shields. Damage resistance may be increased on characters via body armor, character traits, or reputation system abilities. Many engineering and science player abilities will also increase damage resistances for short periods of time. However, it is important to note that damage resistance suffers from diminishing returns in order to ensure that players do not become completely immune to damage. At the moment, the hard resistance cap is 75% damage resistance for both shields and health.

Personal shields are significantly different compared to their Space counterparts. On the ground, personal shields will rapidly regenerate after they stop taking damage for 3 seconds. On the flipside, personal shields are depleted after only a few shots, unless shield healing abilities are used to restore the lost shield points. Due to this, there is a strong emphasis on breaking line of sight with enemy targets in order to allow the shields to recharge.

In addition to abilities, certain gear items and devices will also increase Dodge chance. As far as gear is concerned, there are two sets capable of increasing dodge: the Omega Force ground set and the Shattering Harmonics set. The Gambling Device is a device that will increase a player's Dodge chance by 10% for the duration.

A foil to defense, there are several key offensive mechanics designed to increase damage on the ground.

The expose/exploit mechanic is one of the most common offense mechanics within ground combat. All weapons within Star Trek Online either have an expose attack or exploit attack associated with their secondary firing mode. Some weapons will have expose attacks that have a chance to put an enemy in a vulnerable state. When a target is exposed, a weapon with an exploit attack may be used to deal +200% bonus damage. Exploit attacks also have a chance to vaporize the target, which will naturally kill the target instantly.

As part of the ground combat revamp in Season Four, the 30 meter range for primary and secondary attacks was altered to make different weapon types have a more distinctive characteristic.

In addition, the damage for weapons was adjusted based on rarity so that compared to a common weapon of the same mark, an uncommon would do more damage, followed by a rare, and very rare. The base damage of a weapon is increased by 5% for every modifier attached to the weapon. Due to this, a very rare weapon will deal 15% more base damage than a common weapon of the same mark.

In Star Trek Online, attacking a target in their rear 180 degree arc will increase damage by 50%. Due to this, it is important for players to face their enemies at all times. When retreating from an enemy, it is best to run backwards, rather than turning one's back on the enemy before running.

Critical hits are a form of spike damage within Star Trek Online. Critical hits are a foil to dodge chance. Similar to dodge, whenever an attack is dealt, the attacker has a chance to critically hit the target. If a critical hit is dealt, then the critical severity modifier is added to increase the damage of the attack. By default, players have a 2.5% chance to critically hit and a base 50% critical severity. Similar to dodge, critical chance may be increased via player abilities, devices, and equipment. However, unlike dodge's flat rate halving damage, critical severity may be increased beyond the base 50% via abilities, devices, and equipment.

Lastly, all players have access to an ability called Aim. Aim is a 33% ranged weapon damage increase that is toggled by pressing the X key on the keyboard. However, while in Aim mode, a player's movement speed is decreased by 50%. Due to the toggle nature of the ability, Aim is one of the most frequently used universal abilities ingame.