The Guardian of Forever 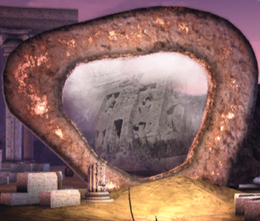 Location(s):
Gateway
Birth year:
Before your sun burned hot in space.
Death year:
I will be here long after.
Voiced by:
Unknown

The Guardian of Forever is a construct of an unknown, ancient alien race, that functions as a time portal. It used to be found on Gateway in the Gateway System. With all missions it was part of now removed from the game, neither the surface of Gateway nor the Guardian can be visited by players.