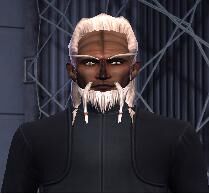 The Anticans are a large, furry, sentient humanoid canine species from the planet Antica in the Beta Renner system. 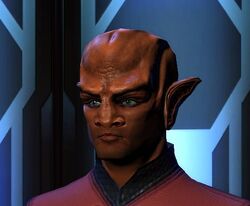 Arkenites are a humanoid species and members of the United Federation of Planets.

They are distinguished by their three cranial lobes, pointed ears and have solid green eyes without an iris.

There are Arkenites serving in Starfleet. 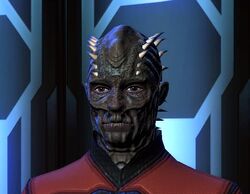 The Arkonians are a humanoid species native to the Alpha or Beta Quadrant.

Arkonians did not appear to have sweat glands, and their bodies' hydration system is not based on water. Instead they drink a brown liquid that they call "tarratt-aash". Their saliva has healing properties, as it can quickly repair skin abrasions. Their cellular structure is not capable of handling rapid temperature changes.

In the early-2050s, the Arkonians achieved warp capability. The Vulcans soon made First Contact with them, but it wasn't incredibly successful. They proved to be suspicious and deceitful, and the Vulcans were soon recalled.

For more than a century after that, the Arkonians and the Vulcans had rocky relations. Arkonian destroyer captains would be wary of any ship that had even a single Vulcan on it.

In 2152, the Arkonians made first contact with Humanity through Enterprise NX-01. 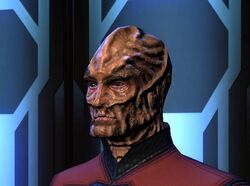 The Kressari are a spacefaring humanoid species. They are primarily known for their commercial trade of botanical DNA.

Although a politically neutral race with no standing military, elements within the Cardassian Central Command employed Kressari as intermediaries in 2370 to secretly supply the Bajoran insurgence group known as the Alliance for Global Unity (or "the Circle"), so that they would force the Federation from Bajor and allow the Cardassians to reclaim the planet. 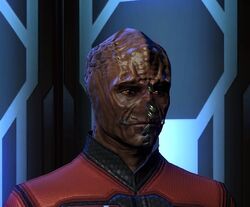 The Letheans are a telepathic species, whose telepathic attacks are almost always fatal. Their skills led them to being hired by various criminal groups in the 24th century. They are known for being incredibly stubborn. 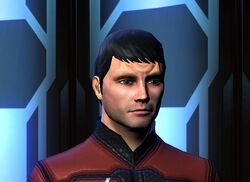 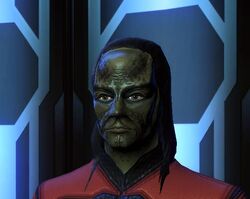 The Xepolites are a neutral, spacefaring race indigenous to the Alpha Quadrant.

In the 24th century, Xepolite free traders often worked as intermediaries for the Cardassians, and many of the arrangements they were involved in were illegal. This included the smuggling of weapons to Cardassian colonists in the Demilitarized Zone. 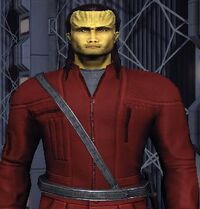 The Hunters are a technologically advanced humanoid race native to the Gamma Quadrant. Their life centers around hunting the Tosk. The hunt is highly ritualized. (Star Trek: Deep Space Nine) 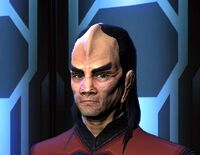 The Karemma are a humanoid civilization native to the Gamma Quadrant planet Karemma. They are also members of the Dominion. Relations between the Karemma and the Alpha Quadrant were first established by the Ferengi in 2370, for the purchase of tulaberry wine. 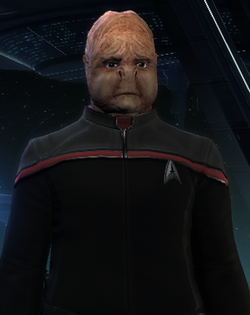 The Overlookers, often referred to as the Hierarchy species are a humanoid species from the Delta Quadrant. The Overlookers are known for their skill in espionage and remote surveillance. 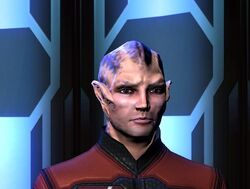 The Kobali are a humanoid Delta Quadrant species. Their method of reproduction is unique and their most distinguishing characteristic: they added to their population by reanimating the deceased corpses of other species, altering their DNA to transform them into fellow Kobali.

They are warp-capable, with a technology level likely not dissimilar to that of Starfleet's, though this can only be inferred. While not generally a hostile species, they are highly protective of their own and would go to great lengths to find and return any member of their society who attempted to flee.

Outside of our Galaxy[edit | edit source]