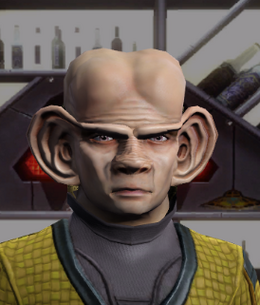 Hadron is a Ferengi vendor located in Quark's Bar on Deep Space 9. He accepts only Gold-Pressed Latinum and Sells Latinum Trophies, or Personal and Ship Holo Emitters.

Hadron used to be the food vendor and be positioned at the end of the bar closest to the door. With the release of Victory is Life, Hadron's role and place was filled by Quark (along with the missions Hadron was involved in). Hadron's role and spot was previously occupied by Woadroh "Woadie" Bhoith.