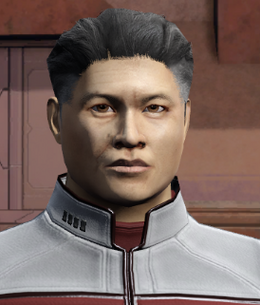 Captain Harry Kim is a Human Starfleet officer. He is best known for his tenure as the U.S.S. Voyager's Operations Officer while the ship was lost in the Delta Quadrant from 2371 to 2378.

In 2371 Ensign Harry Kim is given his first deep space assignment onboard the U.S.S. Voyager after graduating from Starfleet Academy. During his first mission, the ship is lost in the Delta Quadrant, over 70,000 light years from Federation space. After a seven years long journey, Ensign Kim returns to Earth in 2378.

In 2400, 22 years after returning from the Delta Quadrant, Harry Kim held the rank of Commander and was the chief security officer on Starbase 11. Additionally, Commander Kim helped to organize improvements in starbase defenses for outposts along the Neutral Zone.

By 2410, Kim had been promoted to Captain and given command of the U.S.S. Rhode Island.