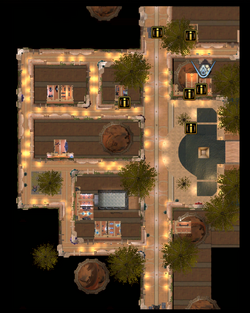 Hathon is a city on Bajor and serves as a social hub for all factions.

During the occupation of Bajor from 2328 to 2369, fifteen farmers from Hathon were executed by the Cardassian authorities under Gul Pirak simply because they refused to display the Cardassian banner outside their homes.

In 2409, during a temporary occupation of Deep Space 9 by rogue Dominion forces, Hathon served as an organizational hub for the Federation and the Klingon Empire to retake the station.

There are many unnamed, interactable NPCs scattered throughout Hathon. They generally provide opinions on the city of Hathon, and on the influx of Starfleet and KDF officers since the Dominion attack on Deep Space 9.