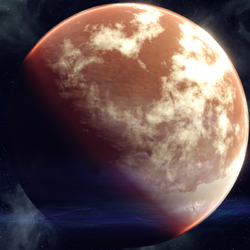 Tunnels beneath the surface

Havas-Kul is the homeworld of the Hur'q, located in the Havas-Kul Sector in former Dominion space.

Havas-Kul orbits a pulsar on a cycle of several thousand years. On its orbit around the star, planet passes through a nebula and collects matter from it. It has a highly eccentric orbital path which takes it out of the system's habitable zone for a period of a thousand years. This corresponds with the Hur'q hibernation cycle.

The planet's core is largely metallic while the surface lacks any metals, liquids or complex compounds. Thermobaric and tetryonic radiation from the nebula bombard the planet surface making it inhospitable for most species. However, the conditions are not as harsh as on a standard Demon-class planet.

The planet's interior is a complex hive of artificial tunnels dug by the Hur'q. This, combined with the nebula's interference, hides any Hur'q activity from sensors.

Due to the radiation, the Hur'q used to subsist mainly on a type of fungus which could withstand the intense radiation on the planet. That fungus was removed from the ecosystem by the Dominion in hopes of forcing the Hur'q into servitude.

The planet's moon has been partly destroyed and fragmented. All that remains is bare rock, having been stripped of any useful compounds by the Hur'q.