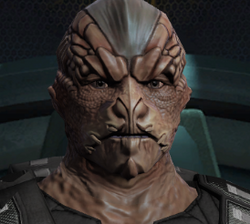 The Hazari are a race of bounty hunters from the Delta Quadrant, who prided themselves on keeping their contracts more than the actual bounty itself. In 2410, they were hired by the Delta Alliance.

They were known as Species 4228 to the Borg, for whom they made excellent tactical drones. When Hazari vessels attacked in pairs, one ship usually stayed behind to reinforce the shields of the other, causing an exploitable weakness in Hazari tactics. When the Think Tank hired Hazari to capture the U.S.S. Voyager in 2375, Captain Janeway was able to negotiate a new deal, turning them against the Think Tank instead.

According to the information discovered by the Alliance Intelligence Network, Hazari roam the Delta Quadrant singularly or in small groups. If possible, Hazari ships team up when in combat, with one ship reinforcing the shields of the other. This makes their defenses almost impenetrable, but is also a weakness that can be exploited by a skilled tactical officer.