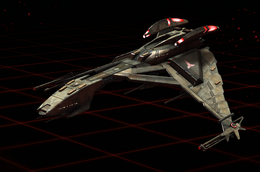 The Hegh'ta-class Heavy Bird-of-Prey is a Tier 5 (Level 40) Raider which may be flown by Klingon Defense Force characters, including Klingon Empire-aligned Romulan Republic and Dominion characters. All faction restrictions of this starship can be removed by having a level 65 KDF character or by purchasing the Cross Faction Flying unlock from the Zen Store.

The Hegh'ta-class Heavy Bird-of-Prey brings everlasting death to the enemies of the Empire. This Heavy Bird-of-Prey is one of the smallest vessels among Klingon endgame ships. However, due to its high Turn Rate and Universal Bridge Officer stations it still is a very competent ship.

The Hegh'ta-class Heavy Bird-of-Prey has a battle cloak that allows the ship to cloak during combat, granting stealth and a damage bonus upon decloaking.

The Hegh'ta-class Heavy Bird-of-Prey comes with an Experimental Weapon slot. This additional slot does not fit standard weapons. Unlike standard starship weapons, Experimental weapons are not affected by weapon firing modes, such as those granted by bridge officer abilities.