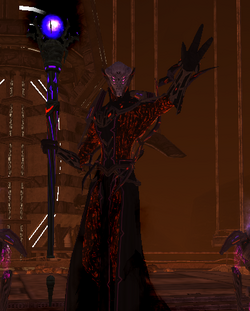 The Heralds were a non-intelligent species on Iconia until the Iconians modified them - first to become their servants, and later their elite soldiers.

The Heralds are similar to the Iconians in stature, with three-fingered hands and an elongated face with three pairs of eyes. They also have slender bodies (with the exception of the Defilers, who seem to be built much tougher than the Thralls and Harbingers -- possibly the result of genetic engineering). Their skin is pale purple with streaks of crimson.

The lowest-ranking Heralds, Constructs, are not "real" Heralds but rather automatons held together with gravitational technology.

Sharing a homeworld, the Iconians used to employ the Heralds as beasts of burden. When automation took over in their society, they modified the Heralds to become intelligent and self-aware in order to function as personal servants, friends and "pets". In utero, each Herald was modified to serve a specific purpose, and also imprinted to have devote loyalty to the Iconians. Once born, they came of age quickly and were trained extensively. Heralds such as M'Tara'ren appeared to be named after the Iconian they directly served. After the surviving twelve Iconians fled the orbital bombardment of their homeworld ca. 200,000 years ago, they adapted a militant and ruthless attitude, turning the Heralds into their elite soldiers. ( “Midnight”)

The first sighting of the Heralds in modern history occurred in mid-2409, when a Quas Cruiser captured the I.R.W. Leahval in the Brea System and dragged it into an Iconian gateway. ( “Cutting the Cord”)

A Herald Harbinger attempted to kill Sela and the player aboard the Andromeda Dyson Sphere the following year. Data recovered from the sphere was delivered to the Delta Alliance's intelligence agencies, who determined that there were potentially billions of Heralds in the Iconians' armies, and that an invasion of the Milky Way was imminent. ( “Uneasy Allies”)

The Iconian War began weeks later, as Herald forces attacked dozens of locations across the Alpha and Beta Quadrants including Starbase 234, New Romulus, Calbriden Prime, and Qo'noS. The Heralds of M'Tara also bombarded the surface of Lae'nas III, destroying the Preserver Archive and destroying all the data the Preservers had on the Iconians. ( “Blood of Ancients”, “Delta Flight”, “Gateway to Gre'thor”, “Brotherhood of the Sword”)

Alliance counterattacks began almost immediately, with Starfleet/KDF/Republic forces raiding the Herald Sphere and the Dinasia System in an attempt to slow the Heralds' advance. However, it was clear to both sides that the Alliance simply didn't have the manpower or the technology to counter the Iconians' armies. ( “The Herald Sphere”, “House Pegh”)

The discovery of the Krenim in the Kyana System triggered a change of plans in the Alliance command, as the idea of using temporal technology against the Iconians seemed much more appealing than a hopeless war of attrition. However, the time required to construct the K.I.S. Annorax was seen as too much, and the Alliance instead opted for a full-scale assault on the Herald Sphere. Although the Alliance was successful in that it managed to kill M'Tara, the lead Iconian, the Heralds inflicted such losses that it was a pyrrhic victory at best. Herald attacks on the Milky Way only increased as a result of the strike, and the Alliance was forced to continue with the development of the Krenim ship. ( “Time in a Bottle”, “Broken Circle”)

As the Iconians and their Heralds lead a last, massive attack against the Sol System, the World Heart is returned to them. The Iconians conclude the war, retreating to Iconia in order to rebuild their society, probably taking their Heralds with them. ( “Midnight”)