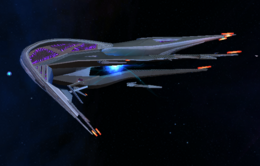 This page is for the playable starship. For the NPC vessel, see Baltim Raider

The Herald Baltim-class Heavy Raider is a Tier 6 Raider which may be flown by characters of any faction. This starship can be used from any level upon completion of the tutorial experience. As you level up, this ship gains additional hull, weapon slots, and console slots.

. The boxed ship is not bound and so may be traded to other players or bought and sold on the Exchange for energy credits under the name [Special Requisition Pack - Herald Baltim Heavy Raider [T6]].

These highly agile raiders are the most commonly seen starship in the Iconian Herald fleet. They are known for their deadly hit-and-run ramming attacks. The Baltim is an exceptionally nimble starship that boasts a tremendous amount of firepower that is relatively durable for a ship of its class.

This console is part of the Herald Tactics Set, which also includes [Console - Universal - Energy Gateway Controller], and [Console - Universal - Oblivion Gateway Module] obtainable with other Herald starships, but also equippable on the Baltim Heavy Raider. For each console added after the first, an additional passive bonus is unlocked.

By equipping all three console from this set, Baltim gets the following ability:

The Herald Baltim-class Heavy Raider comes with an Experimental Weapon slot. This additional slot does not fit standard weapons. Unlike standard starship weapons, Experimental weapons are not affected by weapon firing modes, such as those granted by bridge officer abilities.

By using an [Experimental Ship Upgrade Token], the Herald Baltim-class Heavy Raider may be upgraded to T6-X, unlocking an extra ship device slot, universal console slot, and the ability to slot an extra starship trait.

The Hangar pet version of the Baltim Raider can be unlocked exclusively for playable Herald vessels capable of launching hangar pets.