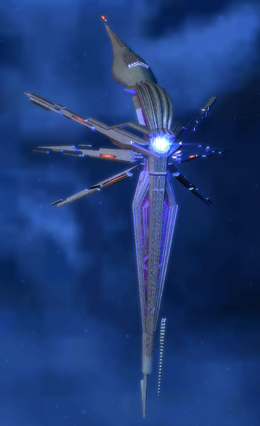 This article is about the playable starship. For the NPC vessel, see Quas Cruiser.

The Herald Quas-class Flight Deck Carrier is a Tier 6 Flight Deck Carrier which may be flown by characters of any faction. This starship can be used from any level upon completion of the tutorial experience. As you level up, this ship gains additional hull, weapon slots, and console slots.

Players can obtain this starship as a ultra rare drop from the [Infinity Lock Box]; it comes in an [Infinity Prize Pack - T6 Ship] choice package, which is bound to you until a ship is chosen. It can also drop from the older [Herald Lock Box]. The boxed ship is not bound and so may be traded to other players or bought and sold on the Exchange for energy credits under the name [Special Requisition Pack - Herald Quas Flight Deck Carrier [T6]].

The formidable Quas class is the workhorse of the Iconian Herald fleet. This incredibly durable starship has both excellent shields and hull strength and boasts two hangar bays.

This console is part of the Herald Tactics set, which also includes [Console - Universal - Ambush Gateway Generator], and [Console - Universal - Oblivion Gateway Module] obtainable with other Herald T6 starships, but also equippable on the Quas. For each console added after the first, an additional passive bonus is unlocked.

By equipping all three console from this set, Quas gets the following ability:

In addition, commissioning a Herald Baltim Heavy Raider from the Lobi Store, will also unlock the availability of Hangar - Baltim Raider hangar pets, as well as the Advanced (Dilithium) and Elite (Fleet) versions.

By using an [Experimental Ship Upgrade Token], the Herald Quas-class Flight Deck Carrier may be upgraded to T6-X, unlocking an extra ship device slot, universal console slot, and the ability to slot an extra starship trait.