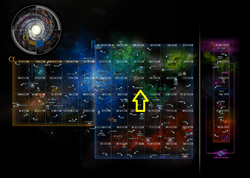 The Hfihar System is a system located in the Rator Sector of the Beta Quadrant.

It is technically part of the Romulan Star Empire but the empress exerts no influence. There are two Data samples in the system.

The unusual gravitational harmonics of the planetoids of the Hfihar system are believed to be due to the elongated elliptical orbit of Hfihar II. However, Federation researchers in the system have recently detected something that could be a dark matter nebula. The presence of an anomaly of that type could be affecting the harmonics of all the planetoids.

The Federation Science Council is constructing a metreon fountain on Hfihar I in an effort to learn more about the nebula.

Hfihar is orbited by two planets and three moons, however, the planets are not visitable in-game. It is unclear whether the moons t'Rllaillieu, Lyioa and Khoal belong to Hfihar I or II. A debris field stretches from the first moon, t'Rllaillieu, to the second.