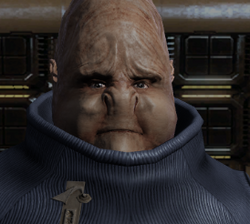 Supervisor Lovro of the Hierarchy.

The Hierarchy is the governing body for the Overlookers, a species native to the Delta Quadrant, and member of the Delta Alliance.

The Hierarchy is an extremely capitalistic society, measuring any undertaking strictly by its profit margin. They are also highly adept in the skills of espionage and remote surveillance. In 2376, the Hierarchy secretly observed the U.S.S. Voyager in order to assess the profitability of a raid on the ship.

The Hierarchy are masters of stealth and espionage, using remote surveillance on passing ships to plan for future attacks. Their cloaking devices, while not advanced as Romulan or Klingon, allow them to slip up on a potential target and attack. However, they are not skilled warriors - they always use preset attack patterns, which can easily be exploited.