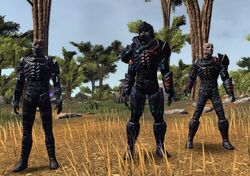 A group of Hirogen hunters

The Hirogen are a nomadic humanoid species and faction originating from the Delta Quadrant. They hunt other sentient beings to challenge their skills and gain trophies as well as reputation among other members of their species.

During her exile between 2387 and 2403, Romulan Empress Sela made contact with Hirogen hunters and conscripted them into her service. In exchange for their support, Sela has granted them the right to hunt in the territory of the Romulan Star Empire.

Hirogen are very distinct in appearance. They are typically very tall and have an enlarged dual-lobed cranium in comparison to Humans. They are closer in resemblance to a reptilian than a human, given their scaled skin, lack of any lips, lack of any hair or facial hair and flat nose (similar to a Saurian).

Hirogen are often seen wearing a silvery blue colored full body armor, sometimes with a helmet and/or mask that covers their mouths and nose (possibly for respiratory purposes when hunting prey).

The Hirogen are natural hunters, rarely travelling with company. Their whole society revolves around what they call "the hunt" which carries an almost spiritual meaning to them. Their hunts consist of themselves, the hunters, and their prey, who can be anything from a creature to a humanoid and they typically go after challenging adversaries which they deem to be worthy prey.

The Hirogen are largely nomadic, traveling in small autonomous groups with a strict hierarchical order.