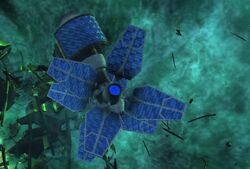 The Hirogen Wormhole Generator, also known as Hirogen Wormhole Projector, is a Hirogen installation located within the NGC 1218 Anomaly located in NGC 1218, Bolarus Sector. This space station is capable of generating and maintaining a wormhole. Such an anomaly is then used by the Hirogen as a trap for unsuspecting prey - entire starships.