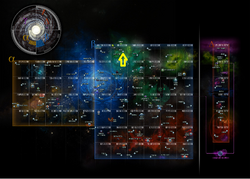 The Hobus System is a system located in the Hobus Sector of the Beta Quadrant.

Hobus is the name of a star that went supernova in 2387, threatening the rest of the galaxy. This supernova was especially threatening because of its ability to transform anything it contacted into energy, which increased its power and allowed it expand. To stop the threat, Ambassador Spock planned to use red matter to create a black hole that would consume the supernova's energy. Before he could successfully carry out his mission, however, the supernova traveled through subspace, reached the Romulan star system, and destroyed the Romulan and Reman homeworlds of Romulus and Remus.

Scandal occurred several years later involving rumors that the Vulcan Science Academy knew about the instability of the star but did nothing until Spock attempted to save Romulus with the Jellyfish, an experimental ship the Academy had built. The scandal resulted in several resignations and sowed seeds of distrust in Romulans toward the Vulcans.

The site of the supernova explosion that destroyed Romulus and Remus in 2387. Current theories suggest that the explosion ruptured subspace, and that the energy from the blast traveled through subspace at speeds much greater than the speed of light.

Because this is the only known incident of this happening, it has been of great interest to Federation scientists. Kathryn Janeway led the first expedition to study the Hobus Cinder in 2388.