This article is about holographic NPC. For other uses, see Leeta (disambiguation). 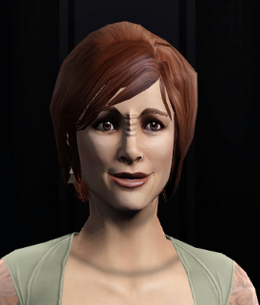 Holo Leeta is photonic Dabo girl owned by Quark Enterprises. She can be encountered at Dabo tables across the galaxy.

By 2371 Leeta was a Dabo girl on Deep Space Nine, working at Quark's. By 2373 Leeta entered a relationship with Ferengi engineer Rom, who in 2375 became Grand Nagus of the Ferengi Alliance.

A holographic version of Leeta was developed by Quark Enterprises in the 25th Century. Leeta was approached by her brother-in-law Quark to pose for the hologram, after he ran into some financial troubles. Subsequently, Dabo tables all over the Alpha and Beta Quadrant have been outfitted with a holographic representation of Leeta, to instruct potential customers and motivate them to play.

Versions of this Hologram can be found on Deep Space 9, Drozana Station, Risa, and Nimbus III. They can also be found on the unique bridges of the Ferengi D'Kora Marauder and Ferengi Nandi Warship. Additionally, a photonic duty officer has been released by Quark Enterprises to serve on customers' starships.