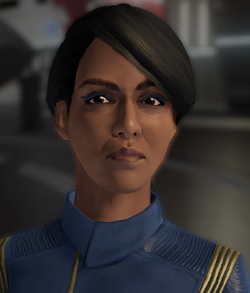 Humans are a race originating from the planet Earth in the Sol System. They were one of the founding races which created the United Federation of Planets, along with Vulcans, Andorians and Tellarites. In Star Trek Online they are a playable race belonging to the Federation faction.

Individual humans differ greatly in appearance. They all possess the basic humanoid shape, but have differences in hair color, skin pigmentation, eye color and other physical features.

Many of the variations between individual humans can be attributed to their heritage. Thousands of years ago, humans lived in generally separate groupings on four of their homeworld's five landmasses, and in varying climates upon each of those landmasses. Since they were relatively stationary, the humans in each grouping began to adapt to their local environmental conditions. For example, the native peoples of the northern portion of Eurasia developed a light skin coloration, while dark skin colorations were common in Africa and Australia, and moderate colorations were common in southern Eurasia and the Americas. Additionally, while brown eye colors and brown and black hair colors were common worldwide, some Eurasians developed blue, gray, or green eye colors and pale or reddish hair colors.

Human society has evolved massively since they achieved warp capable flight in 2063 and first contact was made by the Vulcans. They are known to refer to Earth in the 24th Century as "paradise", and enjoy a longer average life span of 120 years. On Earth, war, disease, poverty, and famine have been completely abolished; the basic biological needs of every citizen are met without compensation. Humans therefore no longer strive to acquire wealth, and instead work to better themselves and their society. As such, there is no base form of currency.

There appears to be a very large number of Starfleet officers who are Human, perhaps more than is justified by the relative population of Earth and its colonies compared to other Federation member worlds. Many of the most famous historic Starfleet officers (Jonathan Archer, James T. Kirk, Hikaru Sulu, Montgomery Scott, Jean-Luc Picard, Benjamin Sisko, Kathryn Janeway, Harry Kim) were or are Human. In addition, most Starfleet ships bear names in English, a Human language, and English also appears to be the standard language used at Starfleet Academy and aboard most Starfleet ships and installations.