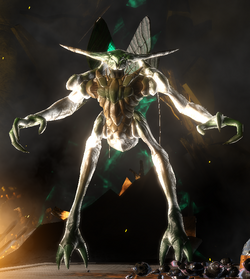 The Hur'q (known to the Dominion as Burrowers) are a race from the Gamma Quadrant who invaded Qo'noS in the 14th century. "Hur'q" is the Klingon name for the species, meaning "Outsider". By 2409 they were believed to be extinct until 2410, when it was found out that they had merely been in hibernation.

The Hur'q are a germanium-based insectoid race that evolved on Havas-Kul. As their homeworld has an eccentric orbit which takes it out of the habitable zone on a thousand-year cycle, the Hur'q naturally hibernate for hundreds of years. While in hibernation, they are cared for by their Attendants, the Drantzuli. Secondly, the planet is bombarded with radiation meaning a key element of their food chain is a fungus that could withstand the intense radiation, a fungus which the Dominion would later remove from the ecosystem, driving the Hur'q insane.

The Hur'q can sense magnetic fields (similar to sharks on Earth) and use crystals to manipulate them as a primary mode of interaction with their technology. They also show an intense dislike of anti-gravity environments.

The Hur'q show an ability to learn as they hibernate, waking up with 1000 years of advancement after each hibernation cycle. This manifests itself in radically different levels of technology on their homeworld.

Hur'q technology is driven by electromagnetic manipulation of morphogenic crystals - this includes doors, life support, even their central computer.

Several thousand years ago, The Hur'q were a peaceful and intelligent race. Their space vessels, while technologically superior, lacked weapons as they saw no use for them. Their homeworld was unique in both its long and eccentric orbital cycle, forcing them into hibernation for thousand-year periods, and for the intense radiation which meant the Hur'q were highly dependent upon a radiation-resistant fungus that thrived on the world.

The then recently-formed Dominion made contact with them, referring to them as "Burrowers", and, despite their pacifism, deemed them perfect candidates for a warrior race. In an attempt to subjugate them and use them as warriors, the Dominion removed the radiation-resistant fungus from the Hur'q homeworld's ecosystem during one of their hibernation periods, with the intent of using it as a bargaining chip. This event would be known amongst the Hur'q as "The Great Betrayal". ( “Tenebris Torquent”)

Unfortunately, the Dominion did not realize that the fungus had become so essential to Hur'q biology that its removal from the ecosystem had a deleterious effect on the species and their society; the Hur'q went mad, becoming focused solely on consumption, and their civilization fell. The Dominion did manage to redesign the fungus to become Ketracel White, used to ensure the loyalty of the newly-created Jem'Hadar soldiers.

In an attempt to salvage the idea of using them as warriors, the Founder would lure them to a planet they wished to subjugate using a Hur'q Signalling Device, with the intent that if a planet submitted, the Hur'q would be driven off by the Jem'Hadar; if the planet resisted, the Hur'q would be allowed to ravage the world until nothing was left, which would serve as a warning to other planets. This worked for a while, but each time the Hur'q re-emerged, they were wilder, more vicious than before, and the Jem'Hadar were forced to the breaking point.

Prior to their most recent hibernation cycle, the Hur'q, rather than staying to fight the Dominion, chose to send some of their forces throughout the Bajoran wormhole into the other quadrants of the galaxy, with the apparent intent of galactic devastation when they next awoke. ( “Doomed to Repeat”)

The Hur'q crossed into other quadrants in the 14th century and, among other things, invaded and sacked Qo'noS. They didn't stay long, but did steal artifacts including the famed Sword of Kahless. The Sword was not recovered until the late 24th century when Worf, Dax, and Kor retrieved it from a Hur'q outpost in the Gamma Quadrant. ("The Sword of Kahless", “Destiny”)

The Hur'q then returned to hibernation, with most of the Alpha and Beta Quadrant, having only just encountered them, believing them to have gone extinct.

With the return of the Fek'Ihri Horde and Molor in 2409, some members of the Klingon High Council expressed their belief that the Hur'q were behind the renewed threat, and claimed that the Sword of Kahless was essential to defend the empire. ( “Destiny”) Eventually, a KDF officer, aided by Kahless, used the Sword to defeat the Fek'Ihri, and detected a resonance signature on Fek'Ihr's corpse which matched the one found on remains of Hur'q technology recovered from archaeological sites. ( “The Gates of Gre'thor”).

The Sword was subsequently lost again when Emperor Kahless fell to the Iconian T'Ket, who kept the bat'leth as a trophy until Quark and a group of his friends were able to retrieve it. ( “House Pegh”) ( “Quark's Lucky Seven”)

By 2409, the Tzenkethi Coalition became aware of the Hur'q hibernation cycle and their imminent re-awakening. They managed to identify the planets where the Hur'q were hiding by locating Drantzuli germanium eggs. The Tzenkethi began a crusade of wiping out the Hur'q by detonating Protomatter bombs to annihilate all life on the worlds on which they were hiding. This campaign was likely instigated by Tzenkethi Admiral Aarn Tzen-Tarrak, who at some point was replaced by the Founder, fearing the Hur'q would get out of hand on the next awakening.

The Alliance, unaware of the Tzenkethi's true target, fought the Tzenkethi and only discovered the truth about the eggs during a Tzenkethi assault on the Dranuur System, when the Drantzuli began to awake. The Tzenkethi assaulted Bajor when the Hur'q hibernation cycle ended and Hur'q left their hiding sites to attack planets all throughout the Alpha Quadrant. ( “Scylla and Charybdis”)

This was part of a ploy to bring the Alliance into the Dominion's war with the Hur'q; Odo had a Hur'q Signalling Device hidden on Bajor to draw the Hur'q into attacking it prior to his arrival. ( “The Search”)