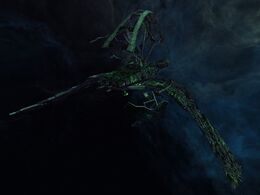 The I.R.W. Valdore is an assimilated Scimitar-class Dreadnought and the final boss of “Khitomer Vortex”.

The Valdore will make short attack runs and then cloak to come about for the next. Each time the ship decloaks it will launch either tractor mines or Tractor Probes. While cloaked it will regenerate; after its first cloaking each time it uncloaks it will immediately attempt to fire its Thalaron Pulse. It used to be that if the enemy the Valdore is targeting maintained a distance of 5 kilometers or greater from her, she would not cloak and thus could be defeated without the Thalaron weapon ever being engaged. However, her AI has been altered [1] and it is unclear whether maintaining a distance of 5 km currently has any effect on the Valdore's behavior.