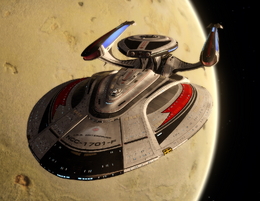 The I.S.S. Enterprise is a Terran Odyssey Dreadnought Cruiser serving the Terran Empire. It was under the command of Admiral Leeta until 2411, where Captain Killy takes over after Leeta returns to the Prime universe.