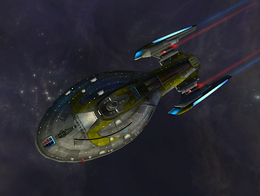 The I.S.S. Star Treader is a modified Intrepid-class science vessel in service to the Imperial Starfleet of the Terran Empire. She takes part in James O'Brien's invasion of the prime universe in 2409.