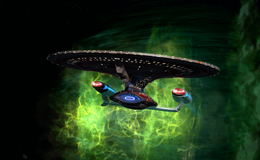 The I.S.S. Venture is a Galaxy-X-class Dreadnought and a flagship of the Terran Empire's invasion forces during their second invasion of the prime universe. The Venture is equipped with technology to create and maintain trans-dimensional portals, possibly based on information gleaned from the Orb of Possibilities.