IDIC Tribble
Rare Ground Device
Bind On Pickup
Unique - Max of one per character
Values do not reflect skills or other modifiers
Removes all existing Tribble Buffs.
Applies different buffs depending on your profession. These buffs affect your entire team and may stack with one another, but only one instance of each may be active on your team.
Value: 0

IDIC Tribble is a Tribble: a cute, round, furry creature that purrs when touched. It has a tranquilizing effect on most races. The IDIC Tribble symbolizes the Vulcan philosophy of "infinite diversity in infinite combinations" by adapting to the chosen profession of the person that pets it, and granting team-wide bonuses based on the user's career. These buffs stack with one another, but not other Tribble buffs, encouraging diverse squads with members from different branches. In addition the IDIC Tribble can be used by Klingons and other species to which Tribbles are typically hostile.

This Tribble is available from the Zen Store for 300 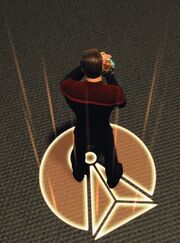 Depending on which profession your character has, when activated, the IDIC Tribble provides the following buffs to you and your team mates:

In addition to the above buffs, if you have all 3 of the profession-specific ones active on you at the same time, your character will also gain the Full Synergy buff and receive:

The Rare and Epic are limited to one per character, though the Very Rare one is not.