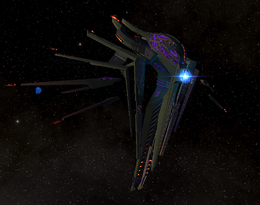 Iaidon Dreadnoughts are titanic Iconian dreadnoughts operated by the Heralds during their invasion of the Milky Way. They are used as capital ships during fleet actions, and also tasked with defending Iconian installations in contested space. They are also capable of deploying Mir Fighters to aid them in combat.