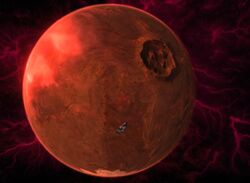 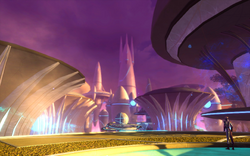 An Iconian city floating over the surface of Iconia ca. 200,000 years ago

Iconia is the homeworld of the Iconians, an ancient race that was a super power until the bombardment of the planet ca. 200,000 years ago.

Iconia is the homeworld of both the Iconians and the Heralds. Initially, the Heralds were used as beasts of burden by the Iconians, until they were able to genetically enhance them to be an intelligent, self-aware species. Approximately 200,000 years ago, Iconia was the center of a Milky Way-spanning, peaceful Iconian civilization, which was made possible by the servitude of the Heralds and the Iconian gateways. As such, the planet housed the World Heart, a central archive of all the knowledge the Iconians gathered. Being envious of the Iconians' superior technology, an alliance of races tried to retrieve the World Heart and bombarded Iconia so that no life remained on its surface. Although twelve Iconians could escape, the World Heart was lost and the location of Iconia would be forgotten in the millenia to come, removing the planet into the realm of myth and legend. ( “Taris”, “Midnight”)

In 2365, the U.S.S. Yamato discovered an ancient Iconian device during archaeological digs on Denius III, revealing the long lost location of Iconia in what by then had become the Romulan Neutral Zone. After arriving at Iconia, however, the Yamato fell victim to an unmanned Iconian Probe that transmitted a piece of Iconian software to rewrite the ship's computer systems and ultimately causing a warp core breach. To prevent both, a war with the Romulan Star Empire, who claimed the planet for themselves, as well as the Iconian technology from falling into the hands of then-Commander Taris of the I.R.W. Haakona, Captain Picard destroyed what was believed to be the only remaining outpost on the planet's surface. (TNG - "Contagion")