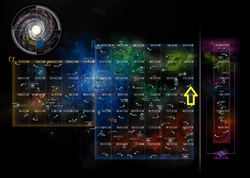 The Iconia System is a system located in the Iconia Sector of the Beta Quadrant. On of its planets, Iconia, is the homeworld of the Iconians.

The homeworld of the Iconian civilization, Iconia was almost destroyed by a massive orbital bombardment approximately 200,000 years ago. The population of the planet was believed to have been killed, although some survivors may have escaped through their multidimensional gateways. Ancient texts describe the Iconians as "Demons of Air and Darkness" and report that they can appear at will anywhere in the galaxy without the use of starships.

In sector space, two planets are visible around the central star. Iconia is the second and outermost world and itself surrounded by two moons, the innermost being larger than the other. The system features a ragged purple nebula within a black space full of stars. There are no asteroids but two Data samples.