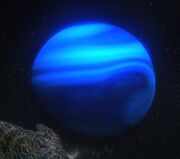 The Idran system is a star system with two planets and the debris of a former planetoid. Both remaining planets are dark blue gas giants. The debris forms a maze of hollow asteroids. Swarms of Idran cosmozoans, centered around Idran Haulers, live there. Apparently, they feed on the remains of the planetoid. Two anomalies can be found between the wormhole and Idran.