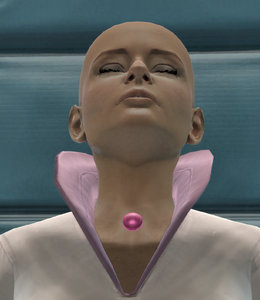 Lieutenant Ilia was a Deltan Starfleet officer assigned to the U.S.S. Enterprise as navigator in the 2270s. In 2411, after a mysterious re-appearance, she was taken to Jupiter Station for medical care and study.

During an encounter with the entity known as V'ger, she was replaced by a nearly identical, albeit artificial version of herself. Researchers on Jupiter Station described Ilia as a "hybrid", a fusion of biological and "very advanced" artificial life. One such researcher reported to Admiral Kathryn Janeway that the probe "made a Soong-type android look crude by comparison".

While aboard Enterprise, this probe served as an "avatar" of V'ger, and would later go on to merge with Commander Will Decker. In a after mission report filed by Admiral James T. Kirk, both officers were declared "missing" rather than killed in action. (Star Trek: The Motion Picture)

Some time before a Terran Empire attack on Jupiter Station, a comatose Ilia probe teleported onto a Starfleet research station in the Epsilon sector.