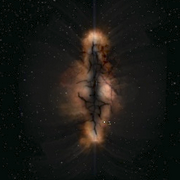 A Tholian interphasic rift, with an Exeter-class Terran Cruiser exiting it.

Interphasic rifts, also known as mirror universe rifts, are a phenomenon in which the fabric of space breaks up, allowing an overlap of parallel universes on different dimensional planes. The Tholian Assembly has been experimenting with interphasic rifts since the 22nd Century.

Upon destruction, Tholian Orb Weavers, Recluses, and Tarantulas have a chance (5% for the Orb Weaver, 15% for the Recluse, and 25% for the Tarantula) of creating an interphasic rift to the mirror universe, through which Terran Empire ships will appear. Each rift has three pulses, through which different types of Terran ships have a specific chance of coming through.

It should also be noted that the Crystalline Entity has occasionally been observed opening numerous interphasic rifts during combat.