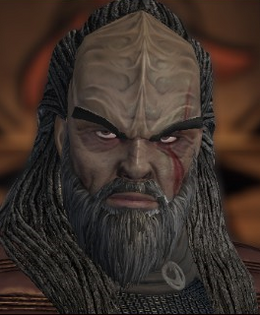 J'mpok of the House of J'mpok is a Klingon politician and member of the Klingon High Council, who became Chancellor in 2393 after slaying Martok under questionable circumstances in ritual combat. The House of Torg openly supported him. During the Klingon Civil War of 2411, he dismisses the High Council and proclaims himself as ‘Emperor’. His 'reign' ends when he is killed by J'Ula of House Mo'Kai, and is ultimately replaced by the clone of L'Rell as Chancellor.

During his rule, J'mpok was located inside of the Great Hall in the First City on Qo'noS.

In 2388, J'mpok led hardliners on the Klingon High Council that believed the Federation and Romulans should pay for the destruction of the Klingon fleet that was sent to stop Nero.

In 2391, J'mpok gathered together ship captains loyal to his house into one fleet after Chancellor Martok refused to entertain J'mpok's idea to fight the Federation and Romulans. The fleet invaded the Zeta Pictoris System and fought against a Romulan fleet, causing a split in the High Council.

In 2392, the Klingon High Council hardliners led by J'mpok demanded an invasion of Gorn space, and Martok, refusing to give in to their demands, continuously rejected them. In 2393, while meeting at the Great Hall, J'mpok slew Martok and assumed control of the Empire. The support for J'mpok's agenda concerned Federation political analysts, who expected things to come to a head by 2395. Under J'mpok's leadership, the Klingons invaded Gorn space and brought its people under the banner of the Empire. In 2399, when the Federation Council condemned the invasion of Gorn space, J'mpok withdrew the Klingon Empire from the Khitomer Accords, beginning a new war between the Federation and the Klingon Empire.

In 2409 amidst the ongoing war, J'mpok agrees on a limited ceasefire with Starfleet in joint cooperations in the fight against the Borg Collective, growing evidence of an Iconian conspiracy, the return of a lost Dominion fleet from 2374, and the discovery of the Solanae Dyson Sphere in the Delta Quadrant.

In 2410, after a joint fleet of Klingon, Federation, and Romulan forces thwarted an Undine attack on Earth and Qo'noS, J'mpok invites representatives of the three factions into the Great Hall. When an Iconian appears and kills several High Council members, he and Fleet Admiral Jorel Quinn agree on a cease-fire between the Empire and the Federation. Following the Iconian War, he met with President Aennik Okeg and Proconsul D'Tan for a summit on New Romulus to establish a formal peace agreement. Later in the year, Alliance actions against the Tzenkethi, which included his approval of liberating General Martok, eventually led to a conflict with the Hur'q. During this conflict, J'mpok refused to commit Klingon forces, it's vacuum filled by the Cardassian Union instead. Despite J'mpok's reticence, some Klingon forces did participate, notably under Martok's banner.

With J'Ula's arrival in the 25th Century causing concerns Alliance leaders, J'mpok joined the efforts in running officers through Historical Tactical Simulations from J'Ula's past, catching them up to speed with the tactics of House Mo'Kai.

In 2411, J'Ula managed to use a little-known Klingon law to reinstate House Mo'Kai which allowed her to address the High Council. Doing so, she calls out J'mpok for his dishonorable deeds and skirmishes ensued in the Great Hall and throughout various systems, beginning a new Klingon Civil War. After some time, J'mpok sends General Martok to accompany an Alliance captain to search Khitomer for J'Ula's whereabouts. Things took a turn when J'mpok brings a fleet of his own and forms an alliance with Aakar, J'Ula's First Officer, who had betrayed her. He sends Klingon forces led by Captain Ja'rod on a slaughter against the Alliance captain, Martok, J'Ula, Adet'pa and other civilians. With the mycelial weapon transferred to his flagship, J'mpok launches it on Khitomer, damaging its facilities and killing numerous delegates. He accuses the Alliance captain, who fortunately escaped with the latter three, for committing the crime and flees after labeling them as enemies of the Empire, turning notable Alliance flagship captains against them. With the aid of Wilkins, the evidence of J'mpok's attack on Khitomer is broadcasted in the Gorath System, this in turn caused the various Klingon Houses to lose trust in the Empire and returned to their own homes. J'mpok then dismisses the High Council and proclaims himself 'Emperor'.

J'Ula turns to her former enemies, including Martok and the Alliance captain, for support; she is also guided by Tenavik and the monks of Boreth, who offer a clone of former Chancellor L'Rell to lead the Empire. J'mpok cracks down on any resistance to his rule in the meantime, sending some to Rura Penthe to deny them their warrior's death, or disabling their fleets with a virus developed by Aakar. L'Rell, J'Ula, and Martok rally enough support within the Empire, including from the Gorn and the Orion Syndicate, to corner J'mpok on Qo'noS. J'mpok threatens to detonate the hydro bomb planted in 2257, the same tactic used by L'Rell to achieve power - ensuring if he could not rule Qo'noS, there would not be a Qo'noS left to rule. J'Ula confronts J'mpok in single combat, and mortally wounds him. But before he could make good on his threat to set off the bomb, his hand is cut off by L'Rell, wielding the Sword of Kahless. J'Ula then delivers the killing blow, but not before J'mpok warns her that the Empire would never follow her.