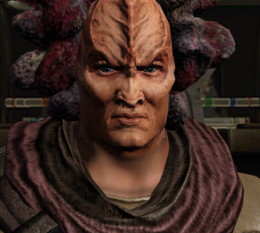 Jal Karden is a male Kazon, and First Maje of the Kazon-Ogla.

Still a young boy, Kar assaulted Commander Chakotay of the U.S.S. Voyager on an away mission in 2372, in order to earn his warrior status within the Kazon-Ogla. After their imprisonment and subsequent escape, Kar was allowed to return to his Kazon sect and subsequently became one of their leaders in the following decades.