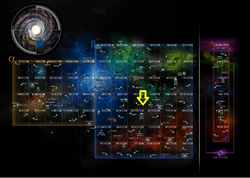 The Japori System is a system located in the Japori Sector of the Beta Quadrant.

The Japori system is comprised of six planets orbiting a Class F star with a magnitude of +5, which is the same brightness as Sol. Of the six planets, only Japori II is M-Class. The neutral world has become a haven for traders wanting to do business with both the Klingons and the Federation in a region subject to the laws of neither.