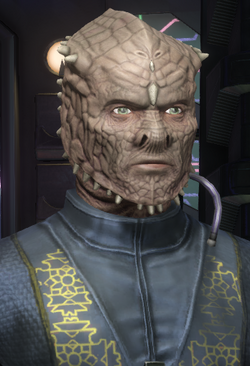 The Jem'Hadar, like the Vorta, are a genetically engineered race of humanoids created by the Founders to be the Dominion's military power.

Jem'Hadar player captains begin the game at level 60 with level appropriate equipment and a number of reputations, Duty officer and R&D schools completed depending on their speciality (see details below). Jem'Hadar Vanguard, which have additional space combat bonuses, can be purchased from the Zen Store.

According to the Masan Research Reports, the Jem'Hadar (also known as "Cadre Species 468") were engineered at Masan Research Station to be the strong arm of the Dominion, guided by the cunning of the Vorta. The use of the Jem'Hadar allowed the Founders to spend more time in the Link.

Jem'Hadar are bred and can reach full adulthood in a matter of days. When born they look very similar to a Human child. As their age increases they start changing to more traditional Jem'Hadar appearance. Adult members of their race tend to have purple or blue skin of varying depths. Their skin is also scaled and they have small horns on either sides of their head and around their jaw. Their melee weapon of choice is the Kar'takin.

To ensure their loyalty, Jem'Hadar are genetically engineered to have an addiction to [Ketracel White]. (Hippocratic Oath") White contains all essential dietary nutrients for the Jem'Hadar, alleviating their need to eat or drink, however if a Jem'Hadar is deprived of White, they suffer withdrawal symptoms including pain, anxiety, loss of mental control, and inability to "shroud". Ultimately, they spiral into homicidal insanity until their entire genetic structure collapses. (Rocks and Shoals")

Those Jem'Hadar bred in the Alpha Quadrant during the Dominion War are referred to as Alpha Jem'Hadar. Also, Odo personally oversaw the development of a branch of Jem'Hadar called Jem'Hadar Vanguard.

All Jem'Hadar captains start with a Jem'Hadar Escort, Jem'Hadar Fighter, and the following:

The preceding bridge officers come qualified in all primary specializations.

The following, depending on their profession: