This page is about the NPC ship. For the playable starship, please see Jem’Hadar Dreadnought Carrier. 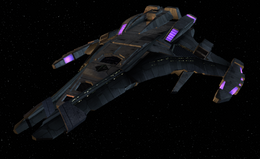 The Jem'Hadar Dreadnought is a Jem'Hadar vessel used by both the Dominion and the True Way Alliance. It was developed in 2374 for use in the Dominion War; at least two such vessels were among the Dominion fleet that disappeared inside in Bajoran Wormhole in that year, and a third was built in the Alpha Quadrant.