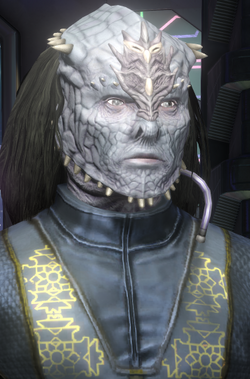 The Jem'Hadar Vanguard are a version of Jem'Hadar specially bred on the orders of Odo. They are a premium race requiring purchase in the Zen Store for 600

In terms of traits, they are nearly identical to regular Jem'Hadar, except that their racial ground damage bonus is also applicable to space combat. They are also given some starting bonuses such as an extra reputation filled out (details below).

All Jem'Hadar Vanguard captains start with a Jem'Hadar Escort, Jem'Hadar Fighter, and the following:

The following, depending on their profession:

The preceding bridge officers come qualified in all primary specializations.

Compared to standard Jem'Hadar, Vanguards have: