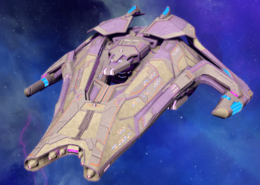 The Jem'Hadar Vanguard Heavy Destroyer is a Tier 6 Destroyer which may be flown by Dominion characters. The faction restrictions of this starship can be removed by having a level 65 KDF character or by purchasing the Cross Faction Flying unlock from the Zen Store. This starship can be used from any level upon completion of the tutorial experience. As you level up, this ship gains additional hull, weapon slots, and console slots.

The Vanguard Fleet is the personal detachment of Dominion starships and soldiers that accompany the changeling known as Odo. As one of the few Founders with an affinity for life as a solid, he was placed in command of this fleet in an effort to combat the re-emerging Hur'q threat.

Odo's time spent living among solids has given him a greater degree of empathy and understanding for the sanctity of life, including those of his loyal Jem'Hadar soldiers. As such, he has commanded additional resources and research be pooled toward increasing the Vanguard's technological and logistical superiority, with the purpose of ensuring a greater chance of victory, and reducing or eliminating Dominion casualties.

Frequently acting as the flagship for Dominion fleets, the Jem'Hadar Vanguard Heavy Destroyer is just as suited to frontline assaults as it is to leading its fellow starships in strategic strikes from a position of authority.

Vanguard starships come included with two loyal Jem’Hadar ace pilots. These expert pilots fly their own Jem’Hadar Vanguard Raiders in formation with you, never straying far from your side. Their extensive experience in team-based tactics allow them to execute powerful maneuvers at your command. In case of catastrophic ship failure, they will return back to operations shortly and automatically after a brief lockout.

The Jem'Hadar Vanguard Heavy Destroyer comes equipped with the [Console - Universal - Enhanced Dynamic Tactical System] which allows the player to switch the Destroyer between Regenerative Mode and Tactical Mode.

As a Jem'Hadar starship, the Jem'Hadar Vanguard Heavy Destroyer can also equip consoles part of the Dominion Console Set.

All maneuvers share a cooldown, and only one may be active at a time. Wingmen may not be ordered to attack specific targets, but will instead rapidly update their targeting parameters based on the player's chosen target.

If destroyed in combat, each Wingman will automatically rejoin the player after a short lockout period has passed.

The Jem'Hadar Vanguard Heavy Destroyer comes with an Experimental Weapon slot. This additional slot does not fit standard weapons. Unlike standard starship weapons, Experimental weapons are not affected by weapon firing modes, such as those granted by bridge officer abilities.

Dominion starships come with standard equipment and weapons of the lowest mark available at the ship's minimum rank. The items provided are appropriate to the type of vessel and its related playing style.

By using an [Experimental Ship Upgrade Token], the Jem'Hadar Vanguard Heavy Destroyer may be upgraded to T6-X, unlocking an extra ship device slot, universal console slot, and the ability to slot an extra starship trait.