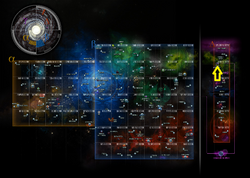 The Jenolan Dyson Sphere is a system located in the Alsuran Sector of the Delta Quadrant.

First discovered by the U.S.S. Jenolan in 2294, this Dyson sphere was moved from the Alpha Quadrant to its current location by activation of an Iconian gateway. The gateway is now one of the ones that allows the ships of Operation Delta Rising to move quickly from quadrant to quadrant.