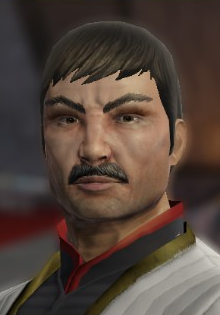 Ambassador Jiro Sugihara is the representative of the Federation Diplomatic Corps on Earth Spacedock. He is from the Earth city of Kyoto. His daughter is an archaeologist working on Bajor. He is located on Earth Spacedock and his role is similar to that of Kazzgur for KDF players.

When reaching Diplomacy tier 4, Federation and Federation-aligned Romulan Republic players may choose one Bridge Officer, either Gorn, Orion, or Nausicaan, from Ambassador Sugihara. You may only claim and own one of these boffs, however dismissing it will allow you to reclaim another. These boffs can only be customized in KDF uniforms.

Their bridge officer abilities are an assortment of rank I and II abilities that can be purchased from any Bridge Officer Trainer. Their trait loadouts are as follows: