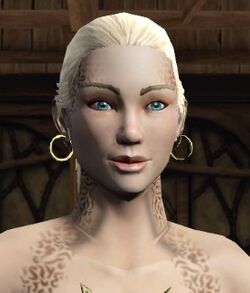 Joined Trill are symbiotic lifeforms and are native to their home world Trill. Trill are a playable race in Star Trek Online for the Federation and Klingon Empire once unlocked in the Zen Store.

The Trill 'host' is very similar to a Human except for their spots, which are mostly seen on the sides of their heads. These spots run from their heads down their shoulders and carry on down their torso and legs to the feet.

The Trill race consists of both hosts and symbionts. The Trill symbiont is a creature which is implanted into a Trill host, and subsequently joins with it. Not all Trill become joined, and only a portion of their population is selected to be eligible for joining. It is known that over half the Trill population can be joined with a symbiont although this information is kept secret and instead the Trill are told that only 1 in every 1000 Trill hosts are capable of joining.

Trill host and symbiont once joined cannot be separated until the host is near death or has just died. Doing so would kill the host and possibly the symbiont if it is not transplanted into another host or returned to its natural liquid-based environment.

Joined Trill were available as a pre-order bonus with digital download editions of the game.

Joined Trill used to have +3 Starship Warp Core Potential, but this was changed in the Season 11.5 skill revamp. It was replaced with Hull Regeneration, as well as more Control Expertise and Drain Expertise.

It is mentioned in "Uneasy Allies" that Joined Trills are immune to Bluegill possession thanks to their Symbiont.