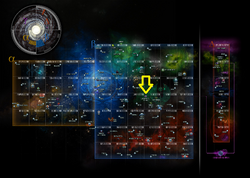 The Jouret System is a system located in the Azure Sector of the Beta Quadrant.

It contains at least four planets.

The Jouret system was once the site of New Providence, a Federation colony with more than 900 inhabitants. In 2366, the colony was destroyed by a Borg attack, an assault so complete that the colony itself was "scooped" off the planet, leaving behind a massive crater.

A failed attempt to recolonize Jouret IV ended in the mid-2380s.